Ulster Bank has confirmed that 280 employees will lose their jobs this year after a restructuring plan that includes closing 22 branches across the country. 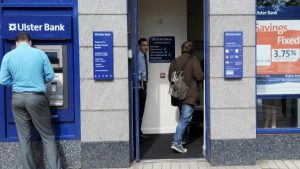 The closures are in response to changing customer demands and as part of a process of “rightsizing” the business, the bank said. All redundancies are expected to be “volunteer-led”. Banks in every province will be affected, including in cities such as Dublin, Cork and Limerick.

“Closing a branch is a difficult decision which we do not take lightly and our branch network remains an important part of how we serve our customers,” Gerry Mallon, chief executive of Ulster Bank, said.

“However, the role of the branch continues to move toward advice and away from day-to-day transactions, with only 10 per cent of our customer interactions now happening in branch.”

Each affected branch gets an average of 150 customers each week, equivalent to 30 a day, according to the bank. It acknowledged that the closures would not suit some people but outlined a range of measures to mitigate the effects.

Two new mobile banks will be provided in addition to the two already in operation. They will travel to rural areas to serve customers, who will also be able to lodge cash and cheques at An Post branches. Six community bankers will support vulnerable customers and help them to transition to digital banking.

Mr Mallon said that the bank was investing in the business and would create 60 new jobs over the year, meaning that net job losses would be approximately 220.

“The way in which our customers bank with us is changing radically and rapidly. In 2016, 62 per cent of customer interactions were digital,” Mr Mallon said.

“The changes announced today will put us in a much better position to focus on the evolving needs of our customers and on our ambition to be the number one bank for customer service, trust and advocacy.”

Larry Broderick, general secretary of the Financial Services Union, questioned the logic of Ulster Bank’s decision to close branches and called for a moratorium on further closures across all lenders.

“Ulster Bank, despite its profitability, is intent on shutting down 20 per cent of its branch network. I fail to see how this can contribute to the long-term sustainability of the bank. It is yet another example of short-term decision-making having a major impact on staff, customers and local economies,” Mr Broderick said.

“Since January financial institutions have announced the closure of 46 bank branches on the island of Ireland. In the Republic there is also very grave speculation regarding the future of the post office network. What is clear is that we cannot allow this hollowing out of access to banking and other services to continue on an ad hoc basis.

“We need a moratorium on closures to give a broad-based forum on banking and financial services the opportunity to chart a long-term strategy for the future of banking in Ireland.”