Samsung is recalling its flagship Galaxy Note 7 after users complained that the smartphone kept bursting into flames. 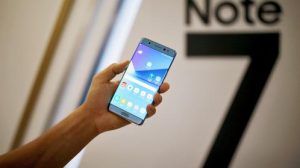 The handsets are being withdrawn from shelves in ten countries, including the US and South Korea, after the electronics company identified a fault with the batteries which meant that some of them exploded when charging.

Samsung has issued a global recall after 35 confirmed cases of the Note 7 catching fire, knocking around £5.2 billion off the company’s market value.

The move comes shortly before its strongest competitor, Apple, is expected to unveil new iPhone models next week.

Growing safety concerns over the Note 7 forced Samsung to suspend its shipments on Thursday and to delay the planned release of the phone this month in several European countries, including the UK.

The Note 7 was launched on August 19, and some 2.5 million have been manufactured, of which more than a million have been sold. It is currently available only to pre-order in the UK, where the launch is now likely to be delayed by two months as Samsung carries out safety checks.

The company said it would issue replacement handsets in about two weeks.

The recall comes after customers posted photos of charred and melted phones on YouTube and social media.

Koh Dong Jin, president of Samsung’s mobile business, said he was “deeply sorry” about the fault.

“We have received several reports of battery explosion on the Note 7 that was officially launched on August 19 and it has been confirmed that it was a battery cell problem,” he said, adding that the fault came from one of two battery suppliers, but refusing to name the company.

One video posted on YouTube shows a melted handset which the owner claims was not yet two weeks old. He said that it caught fire after he used the official Samsung charger to plug in the device.

The South Korean company said that the problem affects around 24 in each million devices, which is about one in every 42,000 sold.

The smartphone has several advanced features, including an iris scanner and a water-resistant body, and had been generally well received by reviewers and consumers before the fault became apparent.

There have been no reports of injuries, but concerns have been expressed about the safety of the device.

A user of the Korean social media site Kakao Story posted photos of a burnt Note 7 on August 30, writing: “There was another explosion of the Galaxy Note 7. It was my friend’s phone.

“A Samsung employee checked the site and he is currently in talks over the compensation with Samsung. You should use its original charger just in case and leave the phone far away from where you are while charging.”