The outgoing chief executive of Mitie, the struggling outsourcer, has been awarded a payoff worth more than half a million pounds. 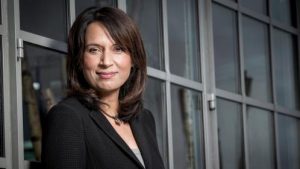 Baroness McGregor-Smith, one of Britain’s most high-profile businesswomen, was replaced by Phil Bentley, the former managing director of British Gas, as chief executive today but will be paid her salary, pension, car allowance and other benefits until the end of October next year.

Mr Bentley’s appointment was announced on October 10 in the wake of a profit warning that sent Mitie’s shares to a six-and-a-half-year low. He joined as a director at the start of last month.

Lady McGregor-Smith will support Mr Bentley until the end of March and be paid £445,355 to cover the remainder of her notice period, which expires at the end of October. The payment will be made upfront in April. She will also receive up to £76,000 in legal and “outplacement” fees.

Staying on until the end of Mitie’s financial year means she will be able to receive the company’s annual performance bonus. Share awards under the 2015 and 2016 long-term incentive plans, which were not due to vest until three years after each award, have been “accelerated” and will vest, along with the 2014 award, at the end of March.

The amount will depend on performance conditions but based on the current share price the maximum number of shares are worth about £2.6 million.

Lady McGregor-Smith, whose pay package was worth £2.6 million last year, declined to comment on the size of her payoff at the time her departure was announced. She said that her exit was entirely her decision and that she had not come under pressure from the board or shareholders.

Oliver Parry, head of corporate governance at the Institute of Directors, said: “If a company has struggled in recent times and the share price has been hammered because of it, shareholders could rightly ask: ‘Why has she been paid so much?’”

Lady McGregor-Smith is a Mitie veteran, having joined as finance director in 2002 before being promoted to chief executive in 2007 and helping to build the company into a cleaner-to-homecare outsourcer generating annual revenue of more than £2 billion.

She was ennobled by David Cameron and became well connected in Whitehall, taking on roles including leading a parliamentary report into ethnic minority exclusion in business.

However, after a torrid year Mitie offloaded its loss-making homecare business last month and took a painful write-off. It had been dogged by claims that carers were not paid the minimum wage because they were not paid for travel time between appointments.

The shares were up nearly 6 per cent at 225p in afternoon trading.