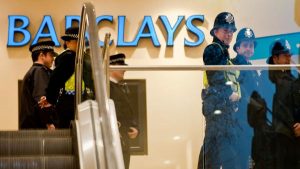 Older people are to get more police protection against “doorstep fraudsters” who try to swindle them out of huge sums for doing simple jobs, such as roof repairs, Money can reveal.

Bank staff who suspect a customer has been targeted by crooks will be able to call 999 and say a password to summon swift police help.

The initiative, known as the banking protocol, is being rolled out across the country after the success of a pilot project in London, which has saved pensioners from losing more than 1m in just four months. Police in the capital have investigated 84 crimes, arrested 14 people and secured one conviction.

Suspicious staff ring 999 and give the password “banking protocol” to raise the alarm – as they did when a 95-year-old customer came into his bank to withdraw 3,000 for house repairs. He had been driven there and instructed to do so by a cheating builder. Staff alerted the police with the password, and the man was arrested as he waited in his car near the branch in Twickenham, southwest London.

The typical police response time during the trial, which started in late October, was 27 minutes.

In an interview with Money, Detective Chief Inspector Andrew Gould said isolated pensioners in affluent areas are most at risk. “The criminals are often very plausible and convincing,” said Gould, from the Metropolitan police. “They will do unnecessary repairs around the house and then offer to bring the victim to their local branch to withdraw large sums of cash.

“Bank staff are the front line against these criminals as they know their customers very well and can identify suspicious behaviour.”

The doorstep scam is one of the most common used by fraudsters. They offer to do building or garden work then demand exorbitant sums for carrying out simple tasks. Some supply their victims with cover stories to use in case bank staff question them about withdrawing a large amount of money. They may be told to say they are sending the money abroad to a relative, for instance.

Caroline Abrahams, charity director of Age UK, said: “Doorstep fraudsters often target people in their seventies, eighties and older, who may be at risk because they are isolated, ill or do not have full mental capacity.

“Victims not only lose their life savings but also their health, independence and confidence.”

Bank branch closures
The problem, however, is that the scheme comes at a time when banks are slashing their nationwide networks. The five leading high street banks – Barclays, Lloyds, HSBC, Santander and Royal Bank of Scotland – have all been shutting branches, where staff are able to keep a watchful eye on the most vulnerable customers.

Bank workers have welcomed the password initiative because it gives them more confidence about tipping off the police. One bank manager intercepted a “romance scam”, where a female fraudster had developed an online relationship with an elderly man over two years. Police were called when the man tried to transfer a large sum of money to her, despite never having met her.

Why is the banking protocol needed?
The average loss through financial fraud is 8,500, and elderly people are the main targets, according to Financial Fraud Action UK, a group set up by the payments industry.

The password scheme is timely because pensioners were given the freedom to access their savings in 2015, effectively allowing them to use their substantial pots like cash machines.

Banks are keen to protect the eye-watering sums that are being stolen. Barclays has shielded more than 500,000 from crooks during the pilot. Halifax saved a similar sum in 2013 when it implemented an early version of the initiative in a branch in Havering, east London, with a high number of elderly customers.

Financial Fraud Action UK believes the banking protocol could prevent 80% of this type of crime.

How does the scam work?
It starts with a knock on the door. Criminals often masquerade as well-intentioned handymen and chat about family members or friends as they try to assess the vulnerability of the elderly man or woman.

They might first splash a bucket of water on an external wall, so they can suggest it is evidence of damp. Or they might offer to clear clogged gutters or repair a leaking pipe. Then comes the bill: the crooks demand a large cash sum and may escort the victim to a local bank branch to withdraw the money.

How will the scheme be rolled out nationally?
About 30,000 police around the country have already received training and tens of thousands more will do so in the coming months. The scheme is organised by National Trading Standards and Financial Fraud Action UK, which are seeking to enlist the help of every bank and building society branch.

How to avoid becoming a victim

• Be suspicious of all “too good to be true” offers.

• Be wary of any cold-callers who offer to do repair work on your property like fixing leaks or unclogging gutters. Instead, head online for some research and find legitimate companies like Clean Pro Gutter Cleaning Santa Rosa or similar ones where you live that can provide you with the service you require.

• Never pay in full for work until it is completed and you are happy with the outcome.

• Don’t feel pressured to agree to work, or any other offer, immediately. Insist on taking time to make an informed decision and speak to friends or family to gauge their opinions.

• Do not rely on glowing testimonials alone.

• Do not hand over money or sign anything until you have checked credentials.

• Never give banking or personal details to anyone you do not know or trust.

• Do not be embarrassed to report a scam.

• If you spot suspicious activity or have been a victim yourself, report it to Action Fraud (actionfraud.police.uk or call 0300 123 2040).

• If you are cold-called or visited regarding any form of investment, always seek independent financial advice.

‘I remembered he had made a big transaction the week before’
Raymond Dighton was still grieving for his wife, whom he had nursed through terminal cancer, when three men knocked on his door offering help around the house.

He was happy to accept as his property desperately needed work.

Initially, the men offered to clear his clogged drains for 30. Then they told him the roof needed to be retiled and the conservatory needed urgent repairs. They also said they would clear the overgrown garden.

Dighton, 61, from Cricklewood, northwest London, said: “I went along with it at the beginning because I knew the house needed repairs. It hadn’t been touched in 20 years. I was trying to organise my wife’s funeral and they were really friendly.

“But as they began making bigger demands I felt really stuck and a little bit intimidated.”

Dighton went into the local branch of his bank, Barclays, to withdraw cash to meet the crooks’ demands. They did some of the jobs they had promised but did not finish them – and charged an extortionate amount for the amount of work involved.

Dighton told Money he had been prepared to hand over a total of 25,000.

He made several payments but when he attempted to withdraw 12,500 in one go, a supervisor, Ann-Marie O’Donnell, became suspicious. “I thought he looked quite vulnerable and remembered he had made a big transaction the week before,” she said.

O’Donnell asked the widower a series of questions, consulted her manager about her concerns and called 999 using “bank protocol”. The police visited Dighton at home within 24 hours and found one of the rogue traders in his sitting room. The man was arrested.

Sadly, Dighton had already lost more than 11,000 of his life savings but he is grateful that he did not lose everything thanks to the actions of the Barclays staff.

His advice to other vulnerable pensioners? “If anyone knocks on your door and offers to do work, just say thank you and that you already have something organised.

“It starts with the gutters but it quickly escalates. I did the wrong thing because I was at a really low moment,” he said.