Thirty-six high-flyers at the National Asset Management Agency (Nama) who are earning over €100,000 are to exit the agency at the end of this year with an average payoff of €42,000 each. 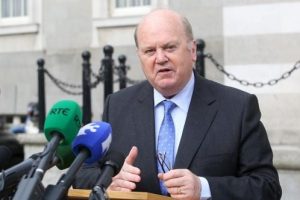 According to Michael Noonan, the finance minister, 50 Nama employees have successfully applied for the agency’s voluntary redundancy programme as it winds down its operations.

The minister said that no employee earning in excess of €200,000 at Nama had opted for voluntary redundancy. The departure of the 50 employees will save the agency €5.3 million on an annualised basis, he added.

The cost of the redundancy scheme for the 50 will be approximately €2.1 million, an average payout of €42,000 each on average.

Yesterday was the deadline for acceptance forms to be lodged and Mr Noonan said that the figures were indicative until they had been signed and returned.

Almost a quarter of the workforce expressed an interest in the redundancy scheme, but Nama’s management blocked a third of those seeking to leave.

The agency is seeking to reduce its workforce from 342 to 291 by the end of the year before slimming down further to 125 staff by the end of next year.

The improvement in the property market has enabled the agency to accelerate its disposal strategy and it is now projected to complete its mandate by 2018 or before.

The finance minister said the cost of Nama’s redundancy scheme and appropriate staff retention measures would not exceed €20 million.

Staff working at the agency are employed by the National Treasury Management Agency on fixed-term contracts and seconded to Nama.

“There is now a considerable degree of uncertainty about the future of Nama with the finance minister seemingly back-tracking on his plans for an early wind up in favour of it turning it in to a property development agency,” Mr McGrath said.

“This raises the question of the number of staff and level of expertise it will require. This issue should be clarified before Nama embarks on completing further redundancies.”