Irish consumers ramped up their pre-Christmas spending in November because of heavy discounting by retailers in Black Friday and Cyber Monday promotions. 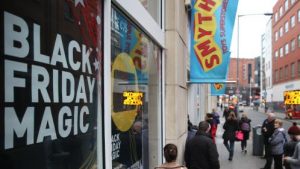 Underlying retail sales, which strip out motor and bar sales, posted a record monthly volume increase of 3.6 per cent in the penultimate month of the year.

The surge in consumer spending, however, was accompanied by a record monthly price decline, with the value of sales up by only 0.6 per cent as companies offered discounts to attract additional customers.

Austin Hughes, chief economist at KBC Bank Ireland, said that the record monthly surge in consumer spending reflected a “new normal”. He added: “The November retail data are consistent with the view that Irish consumers are cautious in their spending behaviour, but there is an important counterweight in that their purchasing power is supported by favourable trends in employment and some improvement in earnings. This suggests that uneven but still solid gains in consumer spending overall might be envisaged for 2017.

“More fundamentally, November retail sales numbers seem to highlight a new normal in which Irish consumer spending patterns are increasingly influenced by a combination of aggressive pricing and heavily promoted events of which Black Friday is a particularly prominent example.”

Black Friday, which comes after Thanksgiving Day in the United States, has been regarded as the beginning of the Christmas shopping period in the US for decades and has gained popularity in Ireland and Britain in recent years.

Along with Cyber Monday — which is a marketing term given to the Monday after Thanksgiving, designed to encourage online shopping — both days are associated with significantly reduced prices.

Mr Hughes added that domestic retailers had responded aggressively to increased competition from online British retailers on account of sterling’s relative post-Brexit weakness. He said that the tactic appeared to have paid off, given that the increased volume of sales more than made up for the lower prices that retailers charged as a result of their discounting.

He warned, however, that the jump in sales during November may erode some of the increases usually recorded in December. The figures released by the Central Statistics Office yesterday showed that electrical goods recorded the largest monthly increase of 17 per cent in November.

In contrast, motor sales, which provided a strong backbone to retail sales throughout the year, were 1 per cent lower in November than the previous month; bar sales were also down, by 0.9 per cent.

Thomas Burke, director of Retail Ireland, the industry’s representative body, said that consumers appeared to be bringing much of their Christmas shopping forward into November and warned that heavy discounting would put pressure on retailers’ margins.

Mr Burke said: “Traditionally, the Christmas shopping season would have begun in earnest in early December. However, an increasing proportion of Irish consumers now make a significant number of their Christmas purchases in November in order to take advantage of the deep discounts available through promotional activity around Black Friday and Cyber Monday.

“Later this month we will receive confirmation of the performance of the retail sector over the crucial Christmas period. Despite the shift in spending patterns in recent years, December remains the single most important trading month for the sector and it remains to be seen if the sector can realise pre-Christmas forecasts of a 3 per cent growth in sales when compared to Christmas 2015. These numbers will be crucial in determining the overall performance of the sector in 2016.”