Sentiment among Japanese manufacturers has fallen for the first time below the level when the country put a huge monetary easing programme in place, according to a Reuters poll. 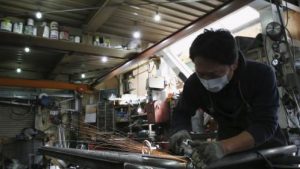 The decline is a further blow to efforts by Shinzo Abe, the prime minister, to resuscitate the economy with measures known as “Abenomics”.

Data out this week indicated that the economy was teetering on the brink, with growth flat, trade contracting and the yen appreciating to levels unexpected by exporters and hitting their bottom lines.

Renho Murata, a candidate to lead the opposition Democratic Party, said that Abenomics, a revitalisation policy that involves fiscal stimulus, structural reform and monetary easing, had “reached its limits”.

The monthly poll conducted by Reuters showed sentiment at +1, down from +3 a month earlier. The score is calculated by subtracting the number of companies with a negative view from those with a positive one. Overseas and domestic demand for goods has weakened, according to recent data. Preliminary GDP figures released this week showed that consumer demand, which accounts for 60 per cent of the economy, had risen by 0.2 per cent from the previous quarter.

Trade data showed that exports had contracted by 14 per cent on a value basis and by 2.5 per cent in volume terms, emphasising the damage that an appreciating yen can do. The Nikkei 225 fell by 1.9 per cent over the week, ending at 16,545.82 points.

One ray of hope is sentiment in the service sector, which rose last month. The Economy Watchers monthly survey showed that sentiment was up by 3.9 points to 45.1. A reading above 50 indicates optimism in a sector.

Optimism even in the service sector may be short lived, though. “The financial markets appear to have calmed down and there are signs of recovery,” the report said. “There are worries about financial markets and foreign economies, but measures could be taken to handle these.”

Those expectations appear to have been flattened by the statistics announced this week. Supermarkets saw prices for goods such as tofu and instant noodles drop this week. Overall, prices fell by 0.01 per cent, the first decline this year — bad news for an economy trying to beat deflation.

Government officials and the Bank of Japan face a dilemma: to push on with a policy platform that is losing credibility or lose face by admitting defeat. The government has committed to fiscal spending worth trillions of yen; the central bank meets next month to evaluate its policies.

Etsuro Honda, a supporter of Abenomics and adviser to the government, told The Wall Street Journal that he believed the bank had room for more easing. Many are doubtful.

Paul Krugman, the economist, believes the problem is that monetary policy has reached its limit and little else has been done. “There were supposed to be three arrows: monetary policy, fiscal expansion and structural reform,” he wrote. “But really only the monetary arrow was fired.”