Margaret Thatcher had to order her son to leave Britain because his alleged attempts to exploit her status for his business dealings caused embarrassment for No 10, a new biography says. 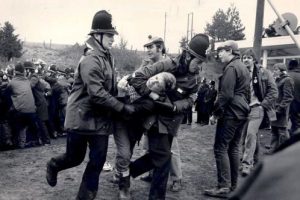 Mark Thatcher was “effectively forbidden to live in Britain” after it was claimed that she had eased the way for him in the Middle East, according to the second volume of the authorised biography of the former prime minister, serialised in The Daily Telegraph.

The book, by Charles Moore, says that in 1980 Mrs Thatcher “unwisely and unbeknown to her private secretary” gave her son a handwritten letter of introduction to Sheikh Zayed, president of the United Arab Emirates.

The link brought an audience with the pro-British Sultan Qaboos of Oman, and then the chance to lobby for a contract to build a university in the country.

Robin Butler, a former principal private secretary to Mrs Thatcher, said that the awarding of the Oman contract to Mr Thatcher “had conveyed a whiff of corruption, though she might not have regarded it as such”.

It was decided in 1984 that Mr Thatcher should leave for the United States.

The book also says that as prime minister Mrs Thatcher adopted a three-year strategy to defeat Arthur Scargill after giving in to the National Union of Mineworkers over pit closures.

She began to put in place a plan to overcome any future miners’ strike after “cutting and running” from a 1981 confrontation. The plan involved stockpiling coal so that by autumn 1983 supplies were as high as possible.

The book also discloses that Mrs Thatcher was aware of sexual rumours about Peter Morrison, deputy chairman of the Conservative party, and “all-male parties” at his home, “particularly in relation to a 15-year-old boy”.

When she heard the stories, which it appears were not followed up, Mrs Thatcher is said to have responded: “Oh dear, well, there we are.”

It also says that when Cecil Parkinson told her in 1983 that he had made Sara Keays, his former secretary, pregnant, Mrs Thatcher responded: “What’s that got to do with anything?”

She added: “They tell me Anthony Eden [prime minister during the Suez Crisis] leapt into bed with any good-looking woman. You can sort this out.”

The book quotes Cynthia Crawford, Thatcher’s assistant, as saying that her marriage to Denis was “not a huge love affair, but they were great soul mates”.