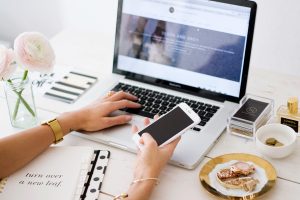 WHEN Mena Trott and her husband, Ben, started producing software in the autumn of 2001, they were 23 years old and unemployed casualties of the dotcom crash in San Francisco.

The couple, born only six days apart, decided to take a few months out. Mena was a recent convert to the then-new blogging (online diary) craze, so she asked Ben to help her produce a better version of her web log – the aptly named Dollarshort.

Little more than five years later, the Trotts have become Silicon Valley celebrities, the husband-and-wife team at the centre of the “social media” phenomenon of which blogging is a part. Mena, the fast-talking public face of their blogging software company, Six Apart, now racks up 100,000 air miles a year, promoting the business, and the blogging idea itself, at conferences around the world.

And far from being a dollar short, she and her husband can now tantalise one another by discussing the telephone-number valuations that are being attached to their business in the wake of Google’s $1.65 billion (£850m) purchase of YouTube, the video-sharing website.

“We talk about this a lot,” she said on a recent trip to London. “If you don’t sell for $1 billion, when do you sell? I joke. I’ll take half that. It’s still an obscene amount of money. I can’t even picture $1 billion. Would we sell for $1 billion? Yes, probably. We talk to people. The offers have never been good enough.”

This is an important year for Six Apart. Unlike YouTube and many other advertising-funded “Web 2.0” businesses, the company takes the decidedly old- fashioned approach of actually charging people for its services.

Its blog-publishing tools, Movable Type and TypePad, are used by many professional bloggers and by companies both big and small, including Times Online, which pay anything from $4.95 a month to hundreds of dollars a year. Mena said 50m people read one of the tens of thousands of TypePad blogs every month.

This is a good and growing business that supports 150 employees, but it is not the break-out phenomenon that justified the fancy price paid for YouTube.

For that reason the Trotts recently launched Vox, a free personal blogging and social-networking service – and Six Apart’s shot at the big time.

One of the important advances with Vox is the privacy controls that allow users to choose just who can see “every post, every picture, every sound clip, every video”. Not every blog, and not every post, needs to be wholly public. There are many times when people want to share information and photos only with their family or friends.

“Just because you’re a blogger, it does not mean you’re publishing to the world,” said Mena. “Without this privacy, blogging won’t grow in the way that it should grow.

“For the most part, people want to write about their family and their plans. When you’re posting about your family online, the last thing you want is that 30,000 strangers are going to see this. With Vox, we can make it so that people don’t think their privacy is being invaded.”

As some unfortunate employees and jobseekers have already discovered, it is not necessarily a good idea to pour out your heart – including your hatred of your boss and details of your sexual predilections – to an online diary. There have been a number of well-publicised cases of bloggers losing their jobs after their employers discovered their indiscretions or true feelings about their supervisor via a blog. Some employers have begun trawling social-networking sites, which usually include blogs, to check up on the suitability of potential recruits.

“We think Vox is a big opportunity,” said Andrew Anker, vice-president of corporate development at Six Apart. “These (privacy controls) are the type of tools that everybody wants to have.”

It’s still early days, but Vox made its debut to generally good reviews and is attracting plenty of users. While in London last month, Mena Trott and Anker met 25 or so Vox users for a drink. “We think Vox has the opportunity, by the amount of uptake that it is getting, to be a real break-out hit,” said Mena. “We’ve never had a real break-out phenomenon.”

Mena, 30 this September and keen to have a family, suggested it might be time to review the future of Six Apart “after this next year when we’ve seen how much of a success Vox is. Is this the phenomenal year that means we are going to be able to write our cheque for whatever we want to do?” Despite her clear interest in the value that she and her husband are creating, Mena said making millions was not her yardstick of success. “It’s just money,” she said. “It won’t make me happier. When we started this we were two 23-year-olds who did not have any connections, did not know anybody and yet we were able to do this. We’ve already succeeded a great deal by being able to bring blogging to the masses.”

She doesn’t come across this way, but Mena said she was “a very pessimistic” person. ” I always integrate the idea that we may fail tomorrow. I feel I have been holding my breath for five years, (worrying) is this company going to succeed? I don’t think I’ve ever breathed. I was a kid who worried about everything.”

Although the Trotts were young and inexperienced, Movable Type, their first product, was an instant hit. Within an hour of it being made available on the web in October 2001, more than 100 people had downloaded it. Even though they were initially only asking users to donate what they thought the product was worth, the couple were soon generating enough income to cover the rent on their apartment.

Their timing could scarcely have been better, as interest in blogging took off exponentially. Mena and Ben were soon working 70-hour weeks to cope with the demand, and the fledgling Six Apart was attracting interest from prominent investors.

In October 2004, Six Apart raised another $10m from Dave Marquardt’s August Capital to fund the acquisition of LiveJournal, a networking website.

Marquardt is a Silicon Valley heavy-hitter: he was the only venture-capital investor in Microsoft, and has served on the board of the software giant for 25 years. Now he is also a director of Six Apart.

Mena said working so closely with her husband – they met at high school when they were 17 and married when they were 22 – had helped make Six Apart a success. “It’s a good thing because we can both be completely devoted to this company without needing to worry about the other person being left out. Obviously we are both consumed by work. Ben and I are both driven. We didn’t need meetings to know what the other person thought.”

Ben is the shy computer engineer, while Mena contributes the design flair and promotional skills. “I’ve always been the outspoken one,” she said. “He has a very good design sense; I am able to follow the technology problems. It’s been very, very easy for some reason.”

Nonetheless, Mena initially struggled to be taken seriously in a male-dominated industry. “Being in the technology industry, where women are often marginalised, we had to really put me forward as part of the company and not just as Ben’s wife. We had to overcompensate.”

Business partners would “e-mail every single person in the company and leave me off the list even though I was CEO and founder. In the early days, it was: ‘I did this, too. Why don’t they recognise me?'” Last year Six Apart raised another $12m from investors, including Intel Capital. Mena said this was to fund the development and launch of Vox – another sign of the importance attached to the firm’s latest initiative.

She continues to blog herself, mostly simply recording her life and the places she visits. Just before Christmas, she created Miss Tified, a beauty blog for those who are clueless about make-up. Judging by the comments on the site, she found time on Christmas Day to attend to her blog.

“So many bloggers have become professional bloggers, able to support their family by writing about things that they love. I still love talking about this stuff.”